Edit
watch 01:36
We're Getting Mutants in the MCU - The Loop
Do you like this video?
Play Sound

Dear Esther was first released in June 2008 as a free single player Source Engine mod developed by indie game developer TheChineseRoom and was later remade for a commercial release on Steam in February 2012. The story is written by Dan Pinchbeck.

The game opens on an old pier in front of a long-abandoned lighthouse, and the player can begin walking around. The player walks past the lighthouse, along a cliff edge, past a beach strewn with shipwrecks, and various abandoned buildings including an old bothy, until eventually they fall down a hole into a massive network of caves, lit by bioluminecent fungus. From here the player character makes their way out of the cave, falling down more shafts before having a vision of a motorway, completely sunk underwater, before awakening on a moonlit beach beneath a cliff, where a radio beacon stands. The player walks up the cliff path towards the beacon and, upon reaching it, climbs to the top of the tower and leaps off the cliff, taking flight and flying around the island and across the bay before the game ends, fading to black.

Throughout the player's journey across the island, a disembodied narrator speaks, reading aloud fragments from a series of letters to a woman named Esther (It is not directly specified who the Narrator is, but it is generally believed that he is Esther's husband, as well as the player character). These fragments of narration are triggered as the player reaches various key locations along the path, typically when certain landmarks are in view, or when the player approaches those same landmarks. Each fragment is semi-randomly generated, with each location have between two to four variations in narration, which changes each time the player restarts the game again. This results in the narration to somewhat lack coherency, forcing the player to draw their own conclusions to the story and making the game replayable. It can take up between six to eight full runs in order to have heard every fragment of narration at least once.

Despite the fragmented narration, the overall story told by the Narrator has a few consistancies: the Narrator tells the story of how, after leaving the hospital for kidney stone surgery, he and Esther were involved in a car crash with a man named Paul, resulting in Esther's death. The Narrator then recounts stealing a book from the library containing chartings of an uninhabited Hebridean island, where he travels to and lives for an unknown length of time. At one point the Narrator injures their leg while climbing through a cave, taking painkillers salvaged from a wrecked ship to ease the pain. All the while, he writes letters to Esther before folding them all into paper boats and setting them off into the sea, after which he commits suicide by throwing himself off the cliff. He also remarks on the island's previous inhabitants: a hermit who lived in the caves, a group of goatherds (most notably a man named Jakobson), and a man named Donnelly who charted the island in the late 1700s.

In addition to the narration, the player also comes across various signs of previous habitation throughout the island- chalk lines carved into cliffsides, standing stones, candlelit shrines, and most notably, various graffiti painted on rocks and the walls of abandoned buildings. The paintings depict chemical formulas, circuit diagrams, and Bible qoutes, all of which aid in telling the story of the island and its previous inhabitants. Unidentified shadowy figures can also be seen walking in the distance at a few points on the island.

The majority of the game takes place on an unnamed and uninhabited island in the Hebrides, an archipelego off the West coast of Scotland. The exact location is never stated, and its likely the island is purely fictional (whether or not it literally exists in-game is also up for debate, due to the unreliable narration and heavy amount of symbolism and metaphor used throughout the game).

In the 2012 remake, the player experiences a vision of the M5 motorway where the car crash took place, all completely underwater. As shown in the pictures below, this is most likely based on the real-life southbound junction 19 of the M5 motorway in the United Kingdom, as the motorway reference numbers are the same in both pictures. 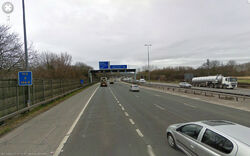 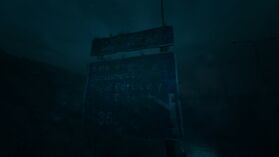 Dear Esther was developed and coded by TheChineseRoom, a modding project initially based at the University of Portsmouth and led by Dan Pinchbeck. The overall development was directed by Pinchbeck (who also wrote the story). The game's soundtrack was written by composer Jessica Curry, and the voice of the narrator was performed by Nigel Carrington. Former DICE employee Robert Briscoe has completely remade the game, with the full support of Pinchbeck. Briscoe and thechineseroom worked in parallel on the game's remake, with much of the level design completed solely by Briscoe based on concept art produced by Ben Andrews. Carrington again provided voice acting for the script, which was extended for the remake, and the re-orchestration of the soundtrack was again composed by Curry. Funding for the redevelopment was provided by an investment from the Indie Fund. Within six hours of the remade release on Steam, over 16,000 units had been sold, allowing the developers to pay back the full Indie Fund investment. Within the first week, 50,000 units had been sold.

There is a big debate whether Dear Esther truly is a game or just a project of art, making it a difficult task for critics to review the game. Writing for Honest Gamers, reviewer Lewis Denby praised the game's original tone, saying "Dear Esther taps into an emotion that few games dare to approach: unhappiness" and stated that Curry's soundtrack created "an impressively ethereal atmosphere". Despite commendations for its premise and story, the original mod (free version) release of Dear Esther received complaints of poor level design and numerous glitches in moving about the terrain.

Dear Esther was selected for the Animation Exhibition at the 2008 Prix Ars Electronica and made the Top 100 of Mod DB's Mod of the Year 2008. In 2009, the game won the award for Best World/Story at the IndieCade Independent Game awards.

The 2012 remake of Dear Esther has garnered mainly positive reviews from critics, receiving an average score of 80% on review aggregator Metacritic based on 23 reviews.[10] Reviewers praised the game's originality and commented favourably on the emphasis on the story; IGN stated that the game "will leave you feeling edified, contemplative, and possibly even emotionally moved". Strategy Informer awarded the game 9/10, calling it "one of the most haunting and well-executed titles of this or any other generation".

On the forums for Dear Esther, there is a high amount of personal experiences by players who sometimes provide their own interpretation of the story. There are also a lot of players either giving their compliments as well as players expressing their disappointment.

Community content is available under CC-BY-SA unless otherwise noted.
Advertisement